Zeta Phi Beta Sorority was founded January 16, 1920 on the campus of Howard University in Washington, D.C. by five women who sought to establish a new organization predicated on the precepts of Scholarship, Service, Sisterhood and Finer Womanhood.  These dynamic young ladies blazed a trail that has been followed by thousands of women worldwide who strive to uphold the founding principles.

The Sorority was the first Greek-letter organization to charter a chapter in Africa (1948); and to form adult and youth auxiliary groups.  It is the only National Pan-Hellenic Council member organization to be constitutionally bound to a brother group, Phi Beta Sigma Fraternity, Incorporated.

Zeta Phi Beta is incorporated in Washington, D.C. and in the state of Illinois.   A non-profit organization, the Sorority is supported by the dues and gifts of its members.

More information can be found at the national website: zphib1920.org

About the Magnificent Midwestern Region

The first chapter in what is now the Midwestern Region, Pi, was chartered in 1927.

E. Juanita Tate, a graduate of Theta Chapter at Wiley College in Marshall and a charter member of Pi Chapter was commissioned by Grand Basileus Violette N. Anderson to head up the newly established Southwest region in 1935.

Juanita advised, “There is nothing in the Southwest to direct but my chapter and I am it’s basileus.”
Grand Basileus Anderson responded, “That’s your job. Get something to direct!”

Juanita took this mandate to heart and eight chapters were chartered within six years:

The name of the region was changed to its present designation during the term of Lucille Nelson Richardson of Xi Zeta Chapter in St. Louis. The Midwestern Region has grown tremendously and now has: 24 Graduate Chapters, 22 Undergraduate Chapters, and 45 Storks Nests; the most in the organization.  It spans the states of: Colorado, Iowa, Kansas, Missouri, Montana, Nebraska, North Dakota, Oklahoma, South Dakota, Utah and Wyoming.

More information can be found at the regional website: midwesternzetas.org

The great state of Oklahoma is the birthplace of the Midwestern Region.  Pi Chapter was chartered in Tulsa, OK in 1927.  It went inactive after one year, but was reactivated by E. Juanita Tate in 1935.  Soror Tate became the region’s first director later that year.  She went on to establish two additional chapters in Oklahoma in rapid succession:

The state now has seven active chapters and continues to be a powerhouse for the Magnificent Midwestern Region.

More information can be found at the state website: zphiboklahoma.org 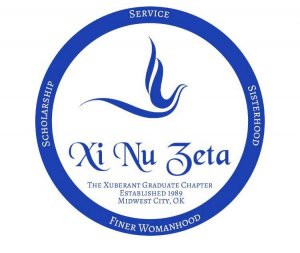 Xi Nu Zeta was awarded a certificate of charter on March 10, 1989 under the leadership and authority of the then Grand Basileus, Eunice S. Thomas. The initiation and charter ceremony was conducted by the then Oklahoma State Director, Lawanna Hackner Bruner. The Xi Nu Zeta chapter became the 2nd graduate chapter of Zeta Phi Beta Sorority in the Oklahoma City area. The first basileus for the Xi Nu Zeta Chapter was Soror Mary T. Williams. Some of the other first officers of the chapter were Annette Ware (1st Vice President), Regina Anderson Woodberry (2nd Vice President) Verlean Delaney (Secretary) and Willie Ann Wood (Treasurer).

Some projects in which the chapter participated were: Adopt a Family, a career fair and College Entrance Exam Preparation. The chapter provided Christmas presents and delivered a dinner basket to a needy family. The chapter also had a toy drive to give needy families toys, through the Department of Human Services. The career fair at The Midwest City Community Center, was designed to expose junior and senior high school students to careers that were expected to be in demand in the future. Also, Xi Nu Zeta hosted a free seminar on college entrance exams at the Midwest City Library. This was done to review with students the subjects that were commonly tested and prepare them for entrance to college.

In July of 2004, the chapter was reorganized, and as of October of the same year the chapter was officially reactivated by Sorors LaKeisha Coleman, Adellaide Heard, Crystal Rena Hines, Rahgna Jeanice Preston, Arlinda Traylor, Rashida Wesley and Artisha Woody.

The chapter participates in the annual Allen Chapel AME Health Fair, and volunteers regularly at the Jesus House and a local nursing center.    Each year the chapter devotes our time to participate in national philanthropies such as the Susan G. Koman Race for the Cure, Lupus Awareness Walk held at the OKC Zoo, the AIDS Walk, and March of Dimes Walk.
Annual Community Picnic — Yearly event where the chapter collects and disburses school supplies.  The picnic is also the hosting platform for two of our other signature programs: Artisha J. Harris-Woody Scholarship — High School and College students are required to write an essay along with other application criteria and at the picnic the scholarship award is presented to one of the applicants.